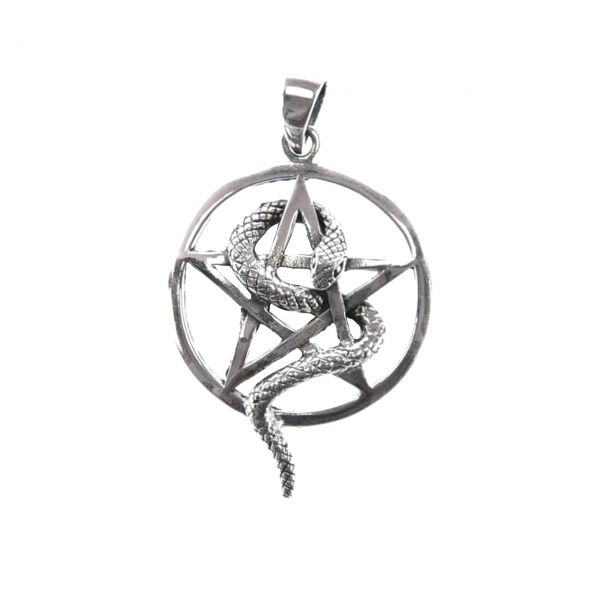 Description Evaluations 0
Description
The Pentagram is an ancient symbol whose first appearance dates back to 3000 BC. can be... more
Close menu
Product information "Snake Pentagram Silver Pendant"

The Pentagram is an ancient symbol whose first appearance dates back to 3000 BC. can be backdated. From there, the history and meaning of this sign runs through our history. Whether on graves, churches or flags, as a symbol for protection and magic or as a mathematical component, we find it everywhere. Today the pentagram is often used to represent the 4 elements (fire, water, air and earth) in connection with the one spirit. Each tip represents one of the elements and the one pointing upwards represents the spirit. It is often also referred to as a five star, Drudenfuss, Drudenkreuz, Alpfuss, Alpkreuz, Nornenstapfe, or witch's star.

The snake is one of the oldest occult symbols that can be associated with certain properties, both in the past and today. In India, they are worshiped as the patron saints of clouds and water, as well as Buddha's helpers. In ancient Greece, the snake was the protector of the underworld, symbolizing the religious connection with the depths of the earth. Their skin represented rebirth, eternal youth and immortality. We see an example of this in the Askleipos staff of pharmacists and doctors. In contrast, the snake in the Bible is the evil seductress and is considered the symbol of falsehood and deceit par excellence. But it is also rehabilitated in the Old Testament when Moses sets up an image of the bronze serpent.

The silver pendants, amulets and talismans offered here are made of 925 sterling silver and have a width of 4mmx7mm