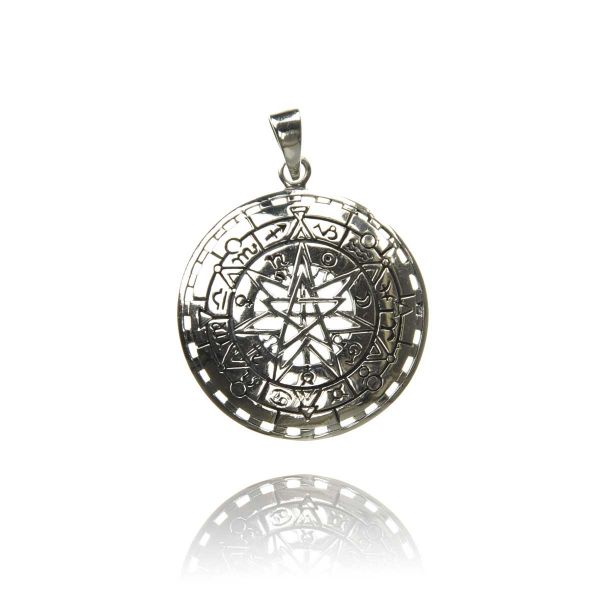 The seven star is an old alchemical and magical symbol from France. The alchemists of that time used it to represent and derive their arts, as well as a protective rune (similar to the pentagram). Also as a cryptic representation of the transmutation e.g. "lead-to-gold" is seen in the seven star.

The seven star is also called the heptagram and can be found in the most varied of versions in neopaganism and the fantasy world of various authors.

The seven star can be used to represent the 5 elements of ancient alchemy (fire, water, air, earth and spirit). Astronomical relationships in the sky, for example the planets and stars, can also be used.

The silver pendants are handcrafted from 925 sterling silver and are of high quality. The eyeled width is 4mmx7mm

Round zodiac pendant with pentagram and heptagram (seven stars) in the center as well as the zodiac and planetary symbols. The real silver chain pendant is round and slightly curved to the front. The back is open in the middle and on the border. WxH 31mmx40mm

Complex seven-star silver pendant without bezel. The pendant is open and evenly designed on the front and back.

plate with an engraved seven star

The seven-pointed star is raised and surrounded by a double protective circle.

Filigree variant of the seven star in the protective circle. Open and light.